During our stay in Val di Rhemes, Aosta in Italy (see previous newsitem) I discovered in a small pond at the campsite a few larvae of dragonfly species. The pond, barely twelve square meters was situated in the playground next to the campsite. It was the first and only indication that this group of insects is present in this valley. Because I regularly visited the playground with my daughter, it was also a great opportunity to keep an eye on the activities. To my delight, after one week and a half, the first emerging dragonflies showed up. However, most larvae in this process looked for a place out of reach of the camera. Eventually, the persistence was rewarded with a specimen that found a spot close to shore. The only downside was a large boulder that was in the way and so at the start it was not an ideal position to take photographs.
The larva had already stopped the day before around the conscious stem, but crawled out of the water the day after. It was about six o’clock in the morning. Only the buds gave a sufficient basis to the further smooth plant stem. After finding the right spot for an hour nothing happened. Still it is important to stay alert, well as the various stages of the emerging are sometimes speed up unexpectedly. This includes the bursting of the skin and the head and part of the abdomen hanging outside. The other phase is when the image lifts it head upwards and pulls out the last part of the abdomen from the skin. Then inflate the wings, following stretching of the abdomen and the stage of the image excess moisture dissipates and starts to get colored.
After eight hours, I stopped recording, partly because the skin with dragonfly came loose and slid down. The new situation hampered further for making good images. The entire process to fly has lasted at least ten hours. In my view, a very long time, and especially since the animal is very vulnerable then.
Finally, from all emerged dragonflies I found, at least thirty percent did not come to a good end. Cannibalism was the most notable cause. The stamp ‘predator’ was demonstrated here in conviction.
Many children saw their first dragonfly to be born in this pond. A wonderful experience. 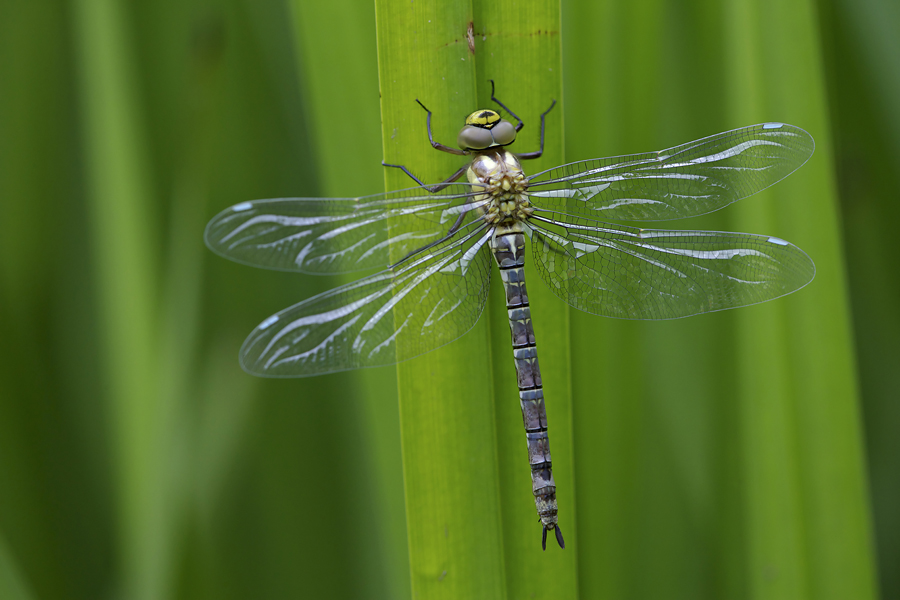