After a long ” silence ” there is finally a new series of images and accompanying stories available on this site. It bumps a bit from holiday report to holiday report. Especially after I moved some time ago and all attention went to our new home.
Nevertheless, during this period I have been able to enjoy a short May holiday to my beloved holiday destination in Poland. In the same period a year earlier (early May), again I’ve brought my new toy, an inflatable shelter. That was a good succes and therefore it is logical that I have taken this again. It is a ” different ” perspective so low above the water and gives possibilities that you otherwise can not easily achieve.
This year too, it seemed that the large numbers of birds had visited the area at an earlier stage. At the time of my arrival the area was uncomfortably empty and the water level was also lower than hoped. The weather conditions had been quite favorable in the period before. The certainty I had in the past with regard to large numbers of birds is not there. It would be ideal to plan a longer stay so that I can see with my own eyes whether a shift has taken place. Or perhaps the numbers of birds are really lower than before. However, missing species such as Swift and Spotted Crake suspects that spring started later.
During the times that I went into the water with the floating cabin, it produced two new bird species that I have never been able to photograph properly. A pair of Little Grebe made short use of one of the floating platforms, made by displaying Whiskered Terns. And two days later, I was surprised by the presence of a trio of Black-necked Grebe. A not so general kind here. At first the birds swam away as soon as I approached them, but fortunately it appeared that they were looking for a suitable place to spend the night. By applying enough patience, I finally managed to get close enough for making a portrait. Of course, the attention was also focused on fine group recordings, but this turned out to be a difficult task.
A big mistake this holiday was a Black stork of wich I have great views of. However, the camera had remained at home due to circumstances, and it was proven once again that this is always punished. Speaking of good intentions !!!! 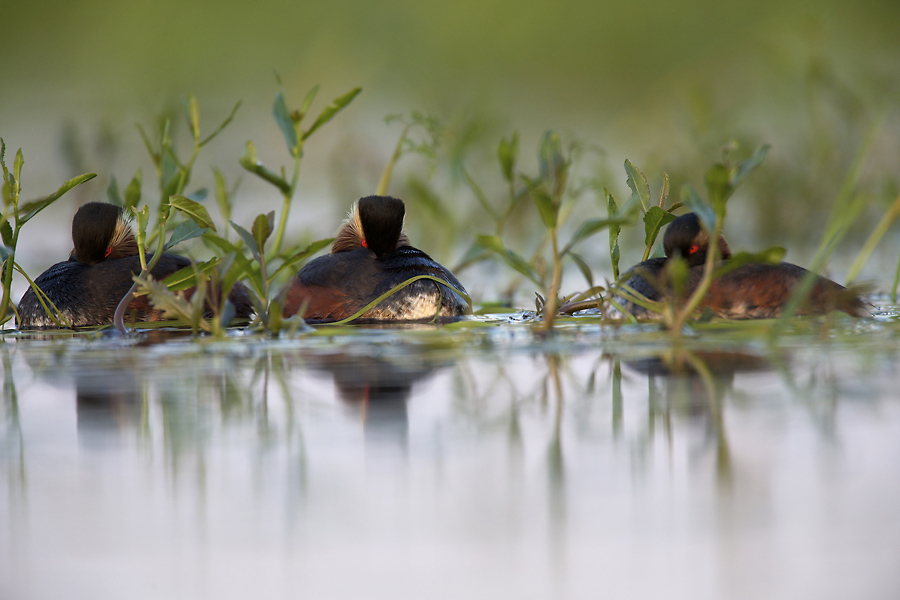