Here part two of my trip to the Indigirka Delta, Siberia, Russia. A journey for which I finally had to bear four years of patience. This series continues to the point that we (we were with a small group) arrived at our base camp with the help of a few very fast boats.
Along the way the tundra turns out to be richly covered with willow bushes, sometimes up to two meters high. A little worried, I ask if the Delta is so overgrown everywhere. That turns out not to be the case and the moment we arrive at the camp, the tundra landscape is as we know it. Unusually large and hardly overgrown. There are plenty of willows here, but only in sheltered places. The advantage of this is that a reasonable number of songbirds also use the delta to breed.
However, the main reason that we are here is the occurrence of Ross’s gull and Yellow-billed Diver, breeding. Both species are relatively easy to see worldwide in only a few places. Of the Ross’ gull, the breeding location of only four percent of the total population is known. At least, I hope I have understood this correctly. Also where the birds stay in the winter has only recently been discovered.
Of the original fifteen pairs at our location, only three have not been predated by the Arctic Fox. The drought has ensured that this hunter can go almost anywhere. For us it has the advantage that walking on the tundra is just a little simpler. Although the latter is a relative term. Our first trip to the breeding location of this beautiful seagull was rushed through nerves. Thus, a number of us on arrival were just about total loss. Adrenaline still remains something special, because the sight of Ross’ gulls on the nest gave us renewed energy. And although nest photography may raise the eyebrows for some, it is virtually the only option for this seagull to see the species in breeding plumage. When the young are born they stay on the nest for a maximum of two days and then go out. From that moment on the parents also seem to have disappear without a trace.
Knowing that very few people on this planet have ever seen a breeding Ross’ gull, I try to take the time to really enjoy it. This also applies to the Yellow-billed Diver. Despite the tiredness we also undertake two long trips to these birds. Walking on the tundra is so difficult because there is no flat surface. For each step you take, you must determine where you put your foot.
Due to the drought, the tundra is remarkably empty. At that time it was simply not suitable for large numbers of waders. A phenomenon that the tundra is known for. The songbirds too, were very disappointing when it came to photography. Most of them had young in the meantime and were therefore remarkably shy for high northern breeding birds. It is clear that the local weather conditions determine what you will find.
All in all, this has become a journey not to be forgotten. The fact that only very few people have ever visited the Indigirka Delta makes it an unprecedented privilege. An exceptional journey. 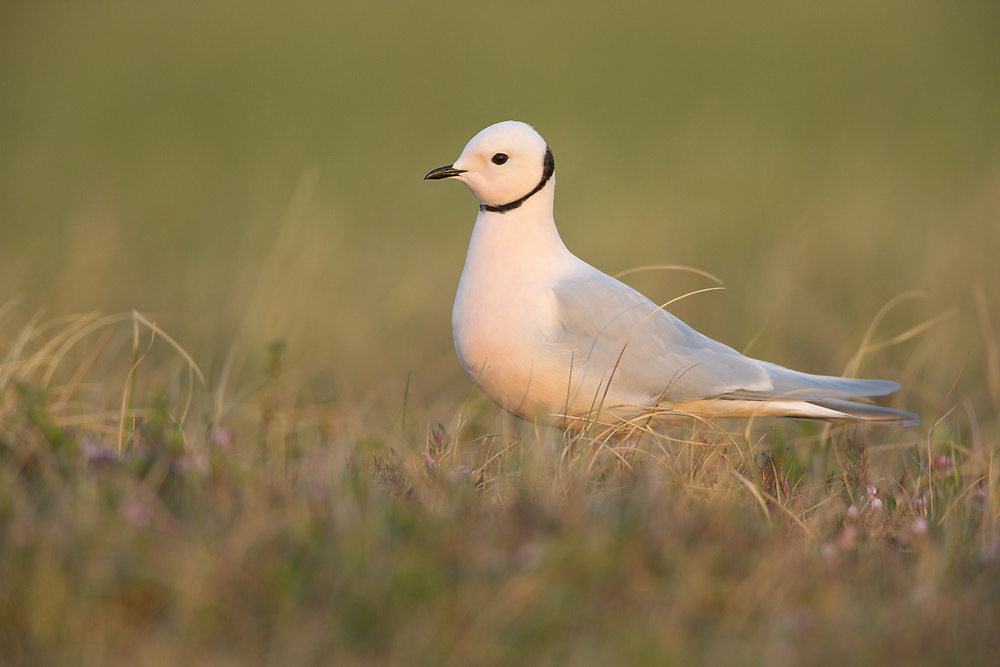