Barrow, the northernmost point of the United States. A destination that had long been on my wish list, and especially because of its location in the Arctic. With a winter that lasts eight months, it is one of the areas where the soil is permanently frozen, the so-called ”Permafrost zone”. Typical of an arctic environment is that winter is followed by a hectic spring in which there is no room for ” life ” to take a moment to relax. The plants and animals rush to populate the tundra and to ensure that this abundant time is maximized to provide for offspring. When temperatures are rising, the first green blades do prick through the snow. And for the birds it means hard work.. They must occupied a territory in a few days time, followed by courtship, nesting and mating. The hatching of the eggs begins immediately. The eggs, although slightly more resistant to low temperatures, must stay warm in order to avoid a failed clutch. Summer is too short to undertake a second breeding attempt, while there is always the danger of hungry predators like Arctic Fox and Skua’s.
The surrounding area of Barrow consists only of flat tundra and is mainly inhabited by the indigenous population, the Unuit. But the name ”Eskimo” is also used by themselves. Remarkably, as in other arctic areas this name is considered an insult, meaning ‘raw meat eaters.
The site Barrow has a population of 5,000 people, including many foreigners. Naturally, because this kind of settlements always attract people who want to train a different life. From the old culture, not many is noticable at first sight. The ancient traditions are mainly reflected during the hunt. The Inuit population is allowed to hunt for their own food on wildlife, including bowhead whale. They also hunt seal, walrus and several species of birds. What is striking is the openness of the people when the subject Whaling is mentioned. The spear has been replaced by a metal pin with a warhead to avoid suffering of the animals. Only trained and designated snipers may operate the weapon and the rules must be applied tightly. All this out of respect for the whales.
The main purpose of this trip was photographing the bird species that inhabit the tundra. The endangered Spectacled Eider is one of the major attractions, but also species such as Pomarine Skua and Snowy Owl can be found. To see the latter species in large numbers requires a good Lemming year, but that was not the case. Because of hunting pressure especially duck species were very shy and perseverance was required to keep good footage at the end. And to illustrate the short spring, in a week the situation of ‘birds everywhere and many puddles” turns into a sometimes abandoned green plain. Any luck with planning is definitely needed. The sunny weather was doubtless remarkable and only during the first and last days we saw the typical arctic weather like fog, rain and heavy clouded skies. In order to maximize our benefit from improved lighting situations, we have reversed the day and night rhythm. Coming home in a great condition was not the case , but it was already taken into account in advance. All in all, my Jetlag was not to heavy.

With this I want to thank both my companions for the success of this particular trip. 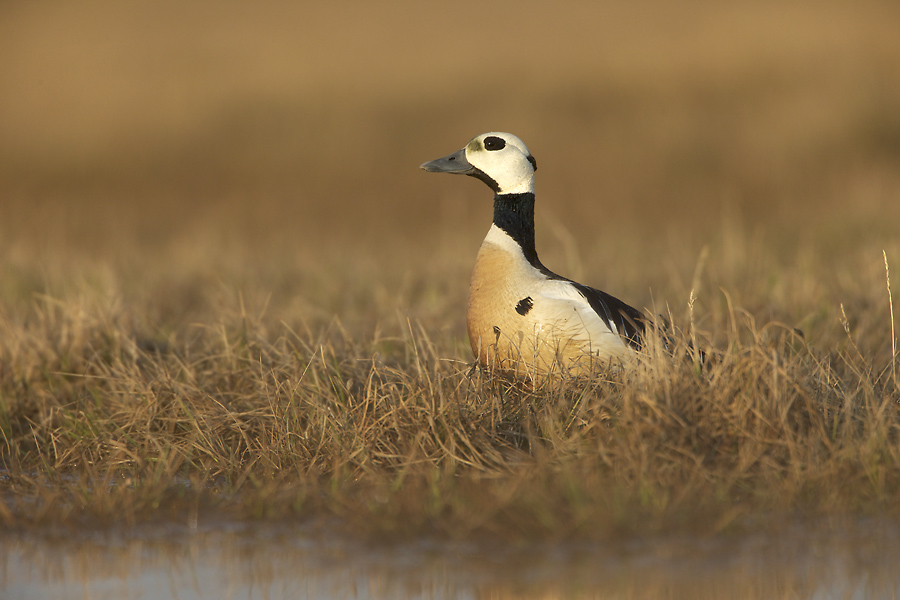